Back to all posts

A big thank you to Jesse Sendejas Jr for writing this article on me and my first solo show. 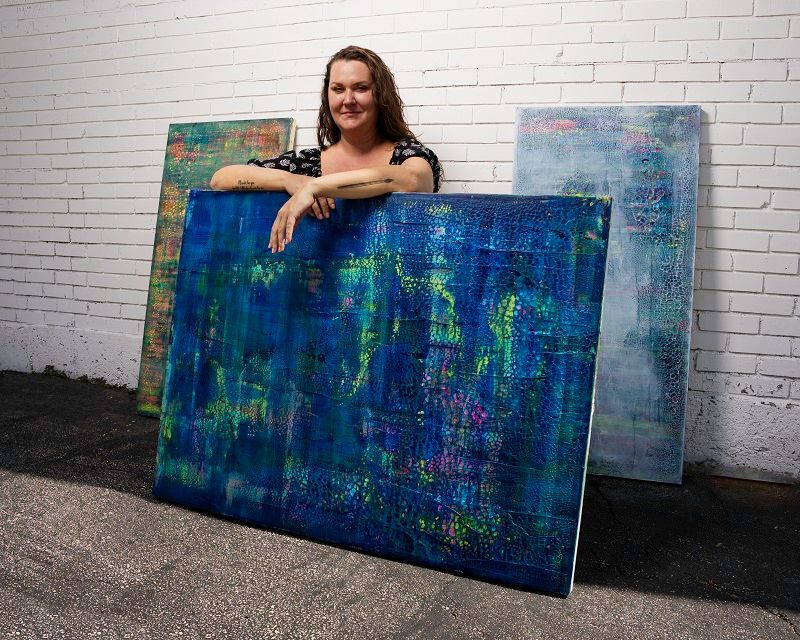 Sometimes when you’re on the road the journey seems endless, but so do its possibilities. That idea is a catalyst of sorts for Houston artist Leslie DeHaven. She’s mapped her trip into the art world, she drives the vehicle and there’s nothing but wide-open space ahead to consider and capture for others.

DeHaven’s work will be on display at the Mid Main Gallery Thursday, November 3, as part of Mid Main Houston’s First Thursday block party series. The First Thursday series benefits local charities but also shines a spotlight on the city’s creatives, musicians and artists like DeHaven, who took up painting two years ago during the pandemic’s lockdown. Using acrylics on canvas and working with different textures like crackle paste, her mixed media work is gaining a growing audience.

“I’m actually really excited about this show because this is my first solo showing that I’ve done of my work and I’ve been working on a more cohesive body of work to be displayed,” she said and noted she’d previously shown at Mid Main Gallery last fall.

“I’m just really excited to have my own vision displayed and kind of a more cohesive body of work. The last time I was there it was a little last minute, so I just kind of had all these pieces that didn’t necessarily go together. It was kind of just what I happened to have on hand. So, this one is a little bit more intentional.”

The show’s title is “The Space Between,” which DeHaven said is a nod to the size of the pieces she’ll show, larger works that allow for more contemplation in what they do and don't reveal.

“A lot of my work, it’s kind of based around seascapes and landscapes. I find beauty in old, decaying architecture,” she said. “It’s a lot of pieces that are either missing or things that are slightly rough or they’re whitewashed over and things are being exposed from underneath. So, the space between to me is about the work itself.” 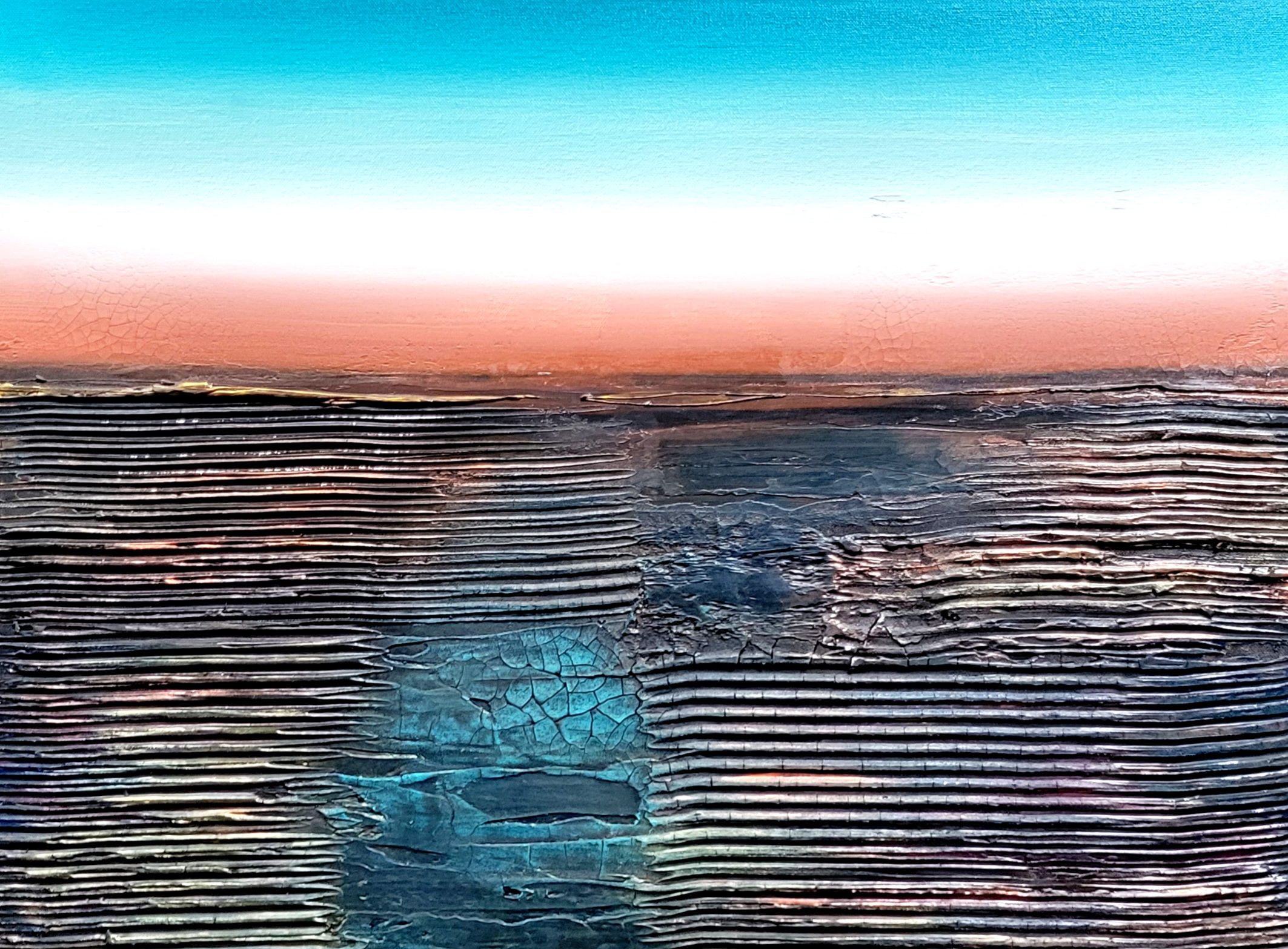 It could also reflect the space from point to point, all that fills a mind’s eye while traveling from one place to the next. DeHaven isn’t a native Houstonian, she’s still a relative newcomer who grew up in the southern Puget Sound and has traveled extensively as a musician and tour manager. She said she moved to Houston from New Orleans “because of love,” taking up residence in the Bayou City to be near her boyfriend, Eric C. Hughes, a drummer who’s worked with everyone from Mike Stinson to Archie Bell, Jerry Jeff Walker to Jello Biafra. He’s the full-time drummer for the Allen Oldies Band, a Mid Main stalwart.

The move is giving DeHaven a place to grow some roots, including these new artistic ones, but she’s recalling a life abroad to create some of her work.

“I definitely haven’t lived like the standard life, I guess,” she said with a laugh. “I’ve definitely moved around and had some unique experiences. With tour managing that took me everywhere from 46 states in the U.S., usually by van, so a lot of road, a lot of open spaces, a lot of mountains. I’ve lived in all different kinds of areas. I grew up in the Pacific Northwest. I lived in northern California, coastal, for about 20 years then New Orleans and then Houston.

“Traveling through tour managing took me into just these really rural areas throughout the country. When you look at my body of work, a lot of it definitely is inspired from either seascapes or landscapes. Obviously, they’re abstract so it’s my interpretation of those things.

“Same thing with architecture,” she added. “I find old, dilapidated buildings and old architecture very fascinating. I love that kind of worn look. So, when I was living in New Orleans, seeing all of these buildings that had all this huge history but there’s mold on them, paint’s peeling back, you know, it’s a beauty of its own. So, I pull a lot of inspiration from that.

“I’ve been around France, I’ve been through Europe, I’ve been in Germany. Same kind of thing. I always kind of utilize the environment around me and develop the sense of composition. What’s interesting when you’re doing abstracts, it’s not really having a subject, but you have a subject. So, it’s drawing a person in and drawing the eyeline to a specific place to where it’s still going to be interesting.” 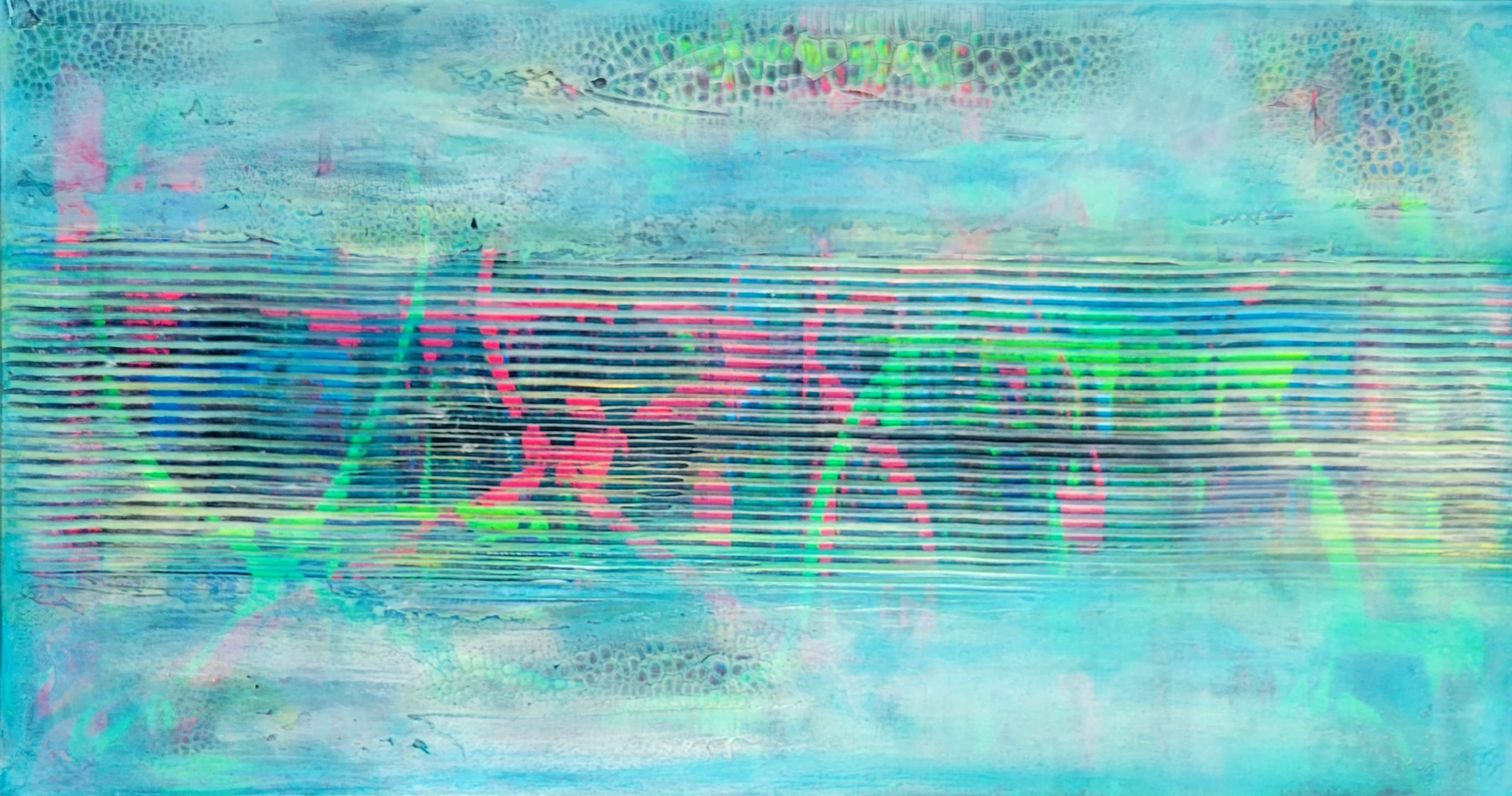 DeHaven’s work for sale can be found on her website and a Facebook event page alerts fans to her approaching shows.

As for her solo show, she said it’ll be kid-friendly since the street party is kid-friendly. DJ Count Chocula will spin some tunes on honest-to-goodness vinyl. There will be a raffle for one on DeHaven’s pieces, no purchase required, with the winner drawn at the end of the reception.

“We’re going to have some snacks and some drinks and just hope to get some people out to look at some art and hopefully buy some art and have a good time,” she said.

DeHaven’s Instagram page features a wonderful quote – “I just want to make things and then think about them.” It succinctly sums up the desire to be creative and allows DeHaven to consider how her perspective has broadened through all she’s seen on her road to Houston. Sometimes when you’re on the road the journey seems endless, but so do its possibilities

“It’s ever-evolving and continuous as it goes. If you dig through my Instagram page you’ll definitely see that I am easily influenced through different things, especially because right now I am so new into the art world, but it’s something that I have a natural knack for and ability with,” she said. “I think because I’m coming from a place where I’m not traditionally taught that everything seems endless, possibilities seem endless, everything is on the table.”